The success of the U.S. residential real estate market, like any other market, is determined by supply and demand. This means we need to look at how many potential purchasers are in the market versus the number of houses that are available to buy.

ShowingTime is a firm that compiles data from property showings scheduled across the country. The latest ShowingTime Showing Index reveals how showings have increased in each of the country’s four regions for five months in a row.

Move.com also just released information indicating that the number of homes currently for sale has declined rapidly and now sits at the lowest level in almost a decade. They explained,

“National housing inventory declined 13.6 percent in January, the steepest year-over-year decrease in more than 4 years, pushing the supply of for sale homes in the U.S. to its lowest level since realtor.com began tracking the data in 2012.”

In response to these numbers, Danielle Hale, Chief Economist at realtor.com, said,

“Homebuyers took advantage of low mortgage rates and stable listing prices to drive sales higher at the end of 2019, further depleting the already limited inventory of homes for sale. With fewer homes coming up for sale, we’ve hit another new low of for sale-listings in January.”

The decrease in inventory impacted every price range, too. Here’s a graph showing the data released by move.com: 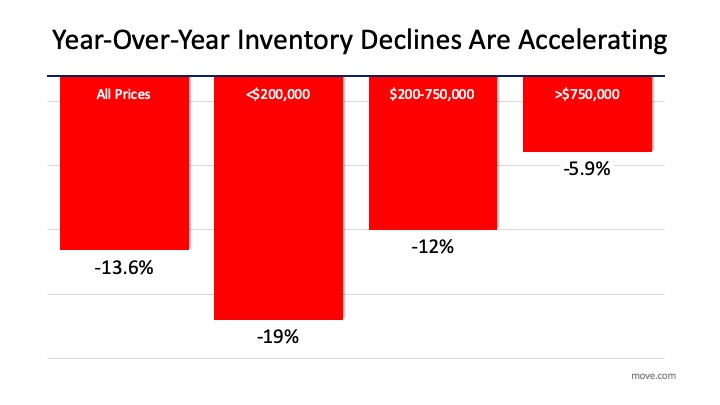 Since there’s a historic shortage of homes for sale, putting your home on the market today could drive an excellent price and give you additional negotiating leverage when selling your house. Let’s get together to determine if listing your house now is your best move.

Finding the right house that meets your family's needs is an important decision; it's one that can affect the quality of your life for years to come. That's why it's especially important to be in a focused, resourceful state of mind when house hunting. It's also helpful to have a clear idea of what you're looking for and have a system in mind for comparing the strengths and weaknesses of every house you visit.

Knowing What You Want

Chances are, you're going to approach your house search with some preconceived notions about features like the floorplan, bedrooms, and number of bathrooms. You may also have strong preferences for a particular school district, the size of the back yard, and proximity to neighbors. One thing's for sure: There are a lot of details on which you'll need to concentrate as you meet with your real estate agent and visit different homes for sale. While conditions are not always ideal for taking it all in, here are a few tips which may help you get the most from the experience.

While it's unrealistic to always expect house hunting to go smoothly and without a hitch, a focused and organized approach to finding the home of your dreams will always yield the best results!

In the community of Shrewsbury, MA in the past month there have been 19 homes sold.  The average sale price of these homes was $499,737 and the homes were on the market an average of 93 days.  There have been 21 homes listed for sale during the past month in Shrewsbury, MA. We are here to serve all your real estate needs in the surrounding communities.  We welcome your business, and we promise to take exceptional care of you or any of your referrals.

5
Rooms
3
Beds
1/1
Full/Half Baths
This spacious 3 bedroom, 1.5 bathroom apartment is conveniently located on a country road in beautiful Upton, just minutes to Routes 495, Mass Pike and the train. The apartment is located in the front of an antique colonial home with the bedrooms on the second floor. Driveway parking is available for 2 cars just outside the back door. Newly renovated and clean with all new paint, flooring, toilets, vanities and countertops. Hookups for washer and dryer in the back hall off the kitchen. The home is situated on a spacious 1.4 acres. Owner lives on premises. Some basement storage available to tenant. Strictly non-smoking, please. Excellent credit and references required. Owner not paying a rental fee - agents must get fee from tenant. Credit check fee of $25/tenant due upon application.
View Full Details
Follow
Email
Save
More
Open House
No scheduled Open Houses
Request a private showing

Photo by Kaboompics .com from Pexels

When the toilet's stopped up, you grab the plunger. If it's the sink, you might run some unclogging solution down with hot water. But some clogged piped won't clear. They get stopped up with gunk and debris that, over time, may work its way deep in the pipes. How do you power through that? Here are some practical ways to clear very clogged pipes.

You remember the classic science project volcanoes, don't you? You can clear a smelly drain using the same fizzy principle, and it's just as fun to watch. For this method, you need:

Now here's how do do it.

Step one: Sprinkle one cup of baking soda into the drain. Don't worry if it doesn't all go in. The vinegar will help.

Step two: Pour in one cup of vinegar. The drain will fizz. The fizz will disinfect and remove odors while loosening stuck on oil and gunk for a smoother flow.

If you drop a piece of jewelry down a kitchen or bathroom sink, this U-shaped part of your drain may catch it before it's gone forever. It can also harbor nasty clogs. Thankfully the trap is easy to remove. You need a wrench and a large bowl.

Step one: Locate the P-trap under your sink. Remove items from the cabinet so you have room to work. Now, place the bowl beneath the trap.

Step two: Unscrew the P-trap. It will have two connectors that simply screw off using a wrench.

Step three: Carefully remove the P-trap and wash the inside using an outside hose or another sink. Don't forget to avoid the sink you removed it from. The water will go straight into the cabinet beneath. Yuck!

Step four: Reposition to P-trap and screw it back on. Test the drain slowly to ensure the P-trap is secure.

3. Remove the Bath Overflow & Snake It

For this one, you need a screwdriver and drain snake. *Pro tip* Never snake from the drain. The pipes are curved. It's similar to the P-trap, so the snake will get stuck.

Step one: Locate the screws on your tubs overflow prevention panel. In some baths, they will be in plain sight. Other manufacturers hide them under the overflow panel, so you may have to hunt for them.

Step two: Unscrew and remove the panel. Now, work your drain snake slowly through the hole. Don't force it or the snake will bow and fold over itself instead of moving into the drain.

Step three: Once you reach a blockage, push through it so that the snake can grab it. Then start slowly pulling the snake back.

If you try these methods, and still can't clear the clog, it may be deep in your piping system where you won't be able to reach without special tools. At that time, you should call a professional. For more home maintenance tips, follow our blog.

Thank you for submitting a private showing request! This window will close shortly.

Thank You For Signing Up!

An email confirmation to . You can continue to browse all real estate listings while also saving them to your profile. If you have any questions, please email us.
Loading